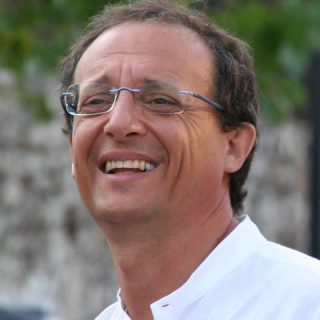 Since middle 80s, Prof. Gasparini has contributed to the identification of several inherited disease genes as well as genes underlying complex and quantitative traits. During these years he spent some time as visting professor at CHOP (Philadelphia, USA) and Sanger (Cambridge, UK). He is directly involved in a series of large studies on isolated populations in Italy, Caucasus and Central Asia in which samples from more than 5000 individuals were collected, accurately phenotyped and genotyped. Parts of these data have been collected thanks to the scientific expedition “Marco Polo 2010” across the Silk Road, which he led and organized. During the last 10 years Prof. Gasparini established a series of collaborations in Qatar where he spent two years at Sidra Medical and Research Center developing research on genetics diseases with a focus on genetics of senses, food behavior and their implication on health.

He has been conferred several prizes and awards and is the author of more than 350 original papers published in peer-reviewed journals. He is the Italian delegate within the Committee for Advanced Therapies of the European Medicine Agency (EMA) (nominated by the Ministry of Health) and member of the SAB of the Idibell-IRO (Barcelona, Spain). He has also served as an external evaluator of Institutions such us the Institute for Molecular Medicine Finland (FIMM), the Wellocme Trust (UK), etc.

In his career, research activities have focused on the identification of genes related to hereditary illnesses and mitochondrial metabolic illnesses. Major fields of research include the understanding of the genetics bases of 1) hearing function and loss, 2) aging, 3) taste and food preferences and their implications on health status. In this light, he founded G&Life (http://www.glifeprogram.com/), a company in the field of nutrigenetics and personalized diets.

Some contents or functionalities here are not available due to your cookie preferences!